What is Photovoltaic Energy? 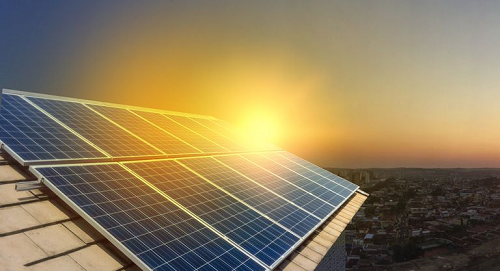 When you’re researching solar power for your home, you’ll come across the term solar PV or photovoltaic. So what does that mean?

The photovoltaic effect is the process that creates voltage or electric current by exposure to light. Photo means light, and voltaic means volts or electricity. A solar
panel is made up of photovoltaic cells made out of a silicon semi-conductor. When these special silicon cells are exposed to light, they generate electricity. The solar
panel system then converts that electricity into current that can be used by your house.

Saying solar PV is one way to differentiate from solar thermal systems that are used to heat water. The water heater systems don’t use the photovoltaic effect. Instead they use a liquid similar to antifreeze to transfer heat from the sun to the water to make hot water.

In a solar PV system, the photovoltaic effect means that when light strikes the surface of the solar cell, electrons become energized and start moving around. The solar cell is designed to make the electrons move in one direction. When you get enough of these electrons moving you have direct current (DC) electricity like from a battery. Then the converter for the solar panels converts the DC in to alternating current or AC electricity that your house uses.

Ever gotten a sunburn on a cloudy day? The photovoltaic effect works the same way. Your solar panels will generate reduced power even on cloudy days because the UV light still gets through the clouds.

That’s why European countries like Germany have invested so much in solar power. They know solar power still works even when you can’t see the sun.

So with some help from a solar installation company like Solar Max, you can tap the sun for free electricity. Give us a call today at: 813-670-3987